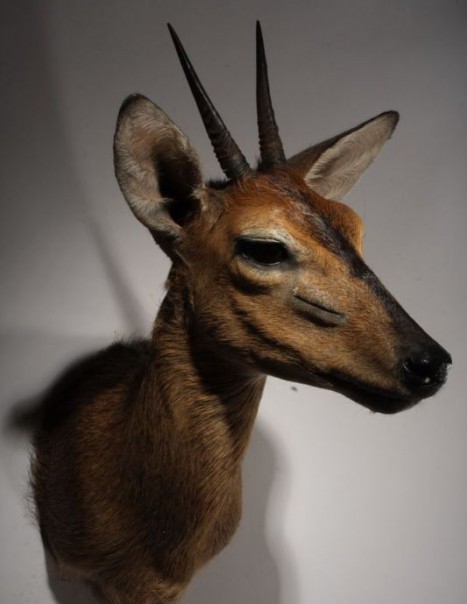 The common duiker, also known as grey or bush duiker, is a mammal of the order Artidactyles found most often in Africa, specifically south of the Sahara.

Physically, the Grimm’s duiker antelope looks like a small antelope, having a more or less clear coat with long hair and a dark ridge between two small horns, present almost exclusively in males.

The Grimm’s Duiker adapts to its remarkable environment, it is capable of not drinking for a few months if it is in a very arid environment, it can also venture into the mountains unlike its cousins antelopes. Nevertheless, this mammal prefers savanna or forest environments where it can hide easily. Wooded areas also offer food that it needs.

The Duiker is primarily herbivorous, eats mainly fruits, plants, but it can occasionally eat insects, birds or rodents and occasionally carrion.

The Sylvicapra Grimmia usually lives alone or in pairs, it is a monogamous animal with a defined territory.

The gestation period lasts about 120 days, the female gives birth to one or two youngs. These are already able to stand up and run the day after their birth. Their mother nourishes and keeps them several weeks away in the tall grass; and it is estimated that they will live a decade.

Finally, the Grimm’s duiker adopt protective behavior of its territory. In case of threat, the male can pursue the unwanted animal. To intimidate, it balks and whistles; and if this attempt fails, the male can attack to hurt its opponent. But if the danger is greatest, duiker will take flight, it is always very attentive to its environment and is known for its fast to respond. So it escapes all predators that may be nearby. These impressive capabilities enable this animal to survive, and for now the extinction of this species is only a minor concern for scientists.