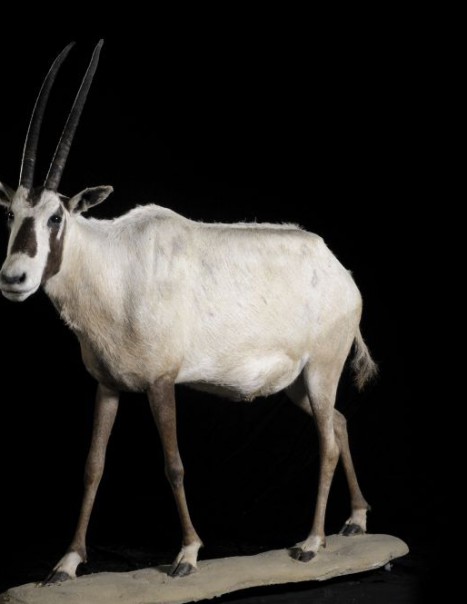 The Arabian Oryx are animals of the phylum Chordata, subphylum of vertebrates, the class of mammals, the order Artiodactyla, Bovidae family and under-family of hippotraginids. It is also known as the white oryx. It is the cousin of scimitar-horned oryx, gemsbok of gazelle and oryx. Other species of the family are all in Africa. It is the only Asian species.

By the 1970s, the Arabian oryx disappeared in the wild because of intensive hunting of man. Fortunately, the World Conservation Union or IUCN estimated, currently, 1 thousand of individuals. Individuals have been gradually reintegrated into their natural environment.

The coat of the Arabian oryx is white. Big black spots down from the bottom of each eye to the muzzle. There is also one above the nose. His tail also ends with a black fur. The hind legs are a little brown or dark. It has very fine members. It has very long horns, V-shaped and straight leaning back. They can grow up to 90 cm.

This animal lives in herds of several dozen individuals. At the top, there is a female.

Originally the white oryx comes from the Arabian Peninsula. There now exists, in the wild, in Saudi Arabia, Jordan, the United Arab Emirates and Oman.

The white oryx always feared the danger from where the exceptional development of his hearing, smell and sight senses.

When it is hot, this animal uses its hooves to dig into the ground. He crouches there to get in the shade.