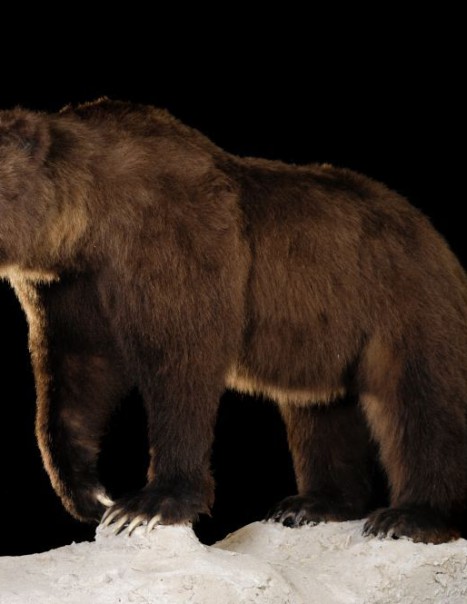 The brown bear is a mammal of the order Carnivora and family Ursidae and we find brown bears in North America, British Columbia, Alaska and the Canadian territories and northwest of United States. But also in France, in the western Pyrenees between 800 and 1800 m.

The brown bear or Grizzly is the most widespread race around the world and has the largest number of subspecies.

This is a great solitaire until the mating season. Its thick fur that protects from the cold, can have different colors; blonde, brown, black or a mixture of these colors. Standing, it can reach 1.5 to 3.5 m, despite its size, it runs at speeds of up to 56km / h. It has incredible strength due to its large muscles of the neck, back and feet. It weighs between 80 and 300kg. This is a good swimmer and climber. It hibernates in winter and live in summer. Its lifespan is between 25 to 50 years.

The brown bear is an omnivore and carnivore. It feeds mainly on plants and fruits: berries, acorns, shoots, roots, raspberries, blueberries. It feasts on insects, rodents, fish and sometimes sheep.

Mating takes place between mid-May and mid-July. Often two males compete for a female. They live together for a few weeks, but may mate with different partners. A mother can have within the same litter cubs from different fathers. Its gestation is 8 to 10 weeks and gave birth from 1 to 3 cubs in January, but emerge from their dens in April. The female takes care of the cubs she breastfeeds for 4 months. They live with their mother for 1 year.