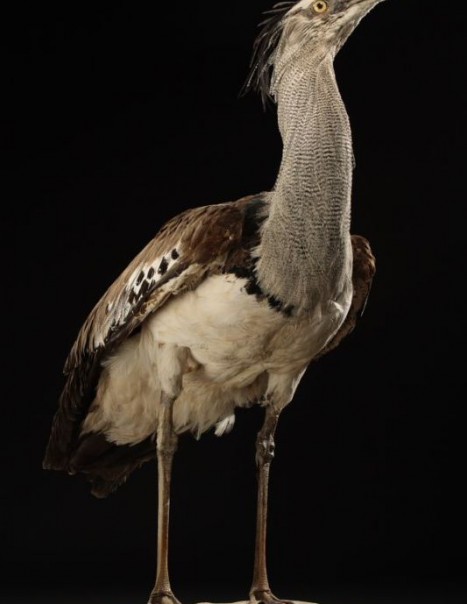 There are two subspecies

Kori Bustard has a long neck, long powerful legs and three long fingers. Legs and feet are light brown or gray, covered with transverse scales. The beak is short and pale gray. Kori Bustard has excellent view. The juvenile male has a shorter peak and a dark coat and it is almost two times larger and heavier than the adult female.

The kori bustard lives in open grasslands and lightly wooded savannas. The two subspecies like areas covered with short grass and offering a good view of the entire landscape, both in East Africa and southern Ethiopia, Kenya, Tanzania. It does not migrate as far as the other birds. It moves only if it needs food or water. This is one of the heaviest birds from Africa, this species does not migrate in the true sense of the word. This is a species that practice polygamy. The male often parade to several females. During the parade, it inflates his neck up to four times its normal size. After some coupling seconds, it starts another parade for another female.

Kori Bustard has a long estimated life of 20 years and reproduces slowly. It can live alone or in small groups. It walks slowly with measured strides. It has a stately move and a remarkably powerful flight; in groups, they work loose line in the grass, looking for food. They probe with the beak, while they walk slowly. They rarely drink, receiving moisture from their food.

It does not build a nest. The female prepares a shallow depression in the grass or on the floor scratching. It lays 1 to 2 light olive green eggs, spotted with brown. Incubation lasts about 23 to 24 days, by female alone. The young stay with her until their plumage, about five weeks. They reach their sexual maturity at the age of 2 and produces only one brood per year.

This omnivore eats insects, grasshoppers, small mammals, lizards, snakes, but also seeds, berries and plants. Sometimes it can even eat carrion. It also consumes acacia sap. It drinks with a sucking motion, while the other birds swallow the liquid looking up.

The kori bustard population is in decline, with local extinctions observed.