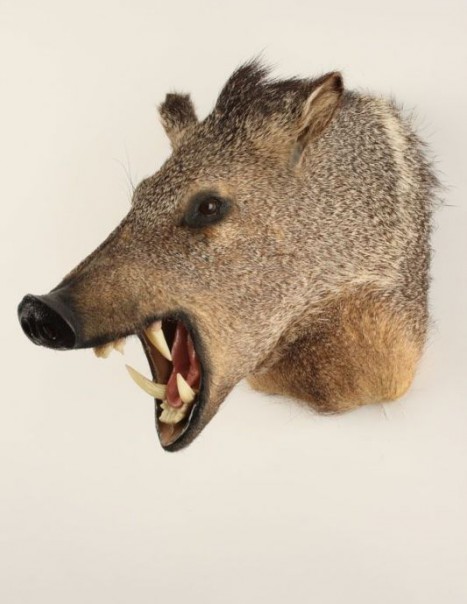 Peccary, its French name, is an animal that looks like a wild boar. In English, it is called “collared peccary.” Scientists have called Tayassu tajacu. The pecari is thinner and smaller than the boar but they are very similar. The peccari has no defenses, unlike the wild boar. His hair is rather dark gray, sometimes red. When they are young, peccaries are yellow colors, reddish or brown. It measures 75 to 100 centimeters in height, and weighs 14-30 kilograms. It measures a little less than a meter in length. The peccari has a different colored mane of his body, it is usually white, and it grows up during the breeding season. It has a life expectancy of 20-25 years.

The peccari is a mammal and it reaches sexual maturity at the eleventh month for the male, while the female reaches between eight to fourteen months. They breed around the month of May and the gestation period lasts between four to five months (145-162 days). The female gives birth to two to four babies. They only have one litter per year.

The peccari is omnivorous, it eats plants as well as meat. Its diet consists of fruits, roots, herbs but it can also eat lizards, insects or snakes. They live in herd and are never alone. They spend their time eating or vandalize the surrounding gardens.

The peccari lives in America, Texas, Arizona or northern Argentina in the Amazon forests or in temperate forests. Its establishes his home in small caves or in a hollow of a tree fell to the ground.

The species of peccary is not endangered, but it is non-domestique. There are three species of pecari: the collared peccari, the white-lipped peccari and the Chacoan peccari.