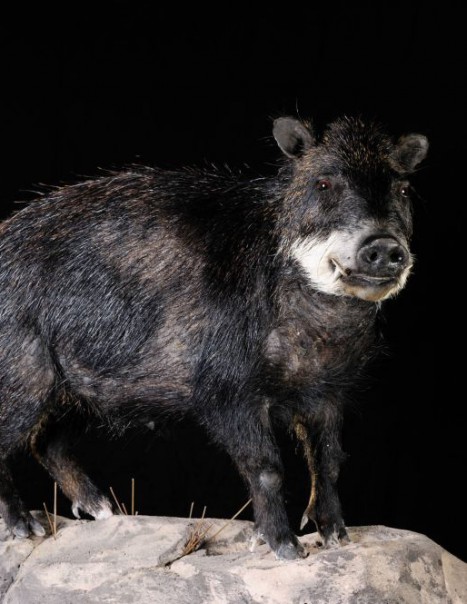 The white-lipped peccary is a species of mammals of the Tayassuidae family.
It is similar to a small boar and cousin to wild American pigs.
This species is native to Argentina, Belize, Bolivia, Brazil, Colombia, Costa Rica, Ecuador, French Guiana, Guatemala, Guyana, Honduras, Mexico, Nicaragua, Panama, Paraguay, Peru, Suriname, and Venezuela.
Most of its range is in rainforests, but it is also known from a wide range of other habitats such as dry forests, grasslands, mangrove, Cerrado and dry xerophytic areas.

The head and body length ranges from 90 to 139 cm and the adult weight is 25 to 40 kg. Their color is generally brown or black. The coat is bristly and has hair running lengthways down the spine growing longer than the hair running down the body, making a crest, which stands up when the peccary becomes excited. The peccary has a round body with a long snout that ends in a circular disk where the nasal cavity starts. They have white markings that start below the snout and run to the cheek area just below the eyes.

This species is omnivorous, feeding mostly on fruit, and are usually found traveling great distances to obtain it. They also eat leaves, stems or animal parts. Their main predators are the jaguar, puma and potentially boa constrictors.

The white-lipped peccary can breed throughout the year depending on location. The breeding season is extremely variable and consists of two distinct peaks in areas such as Costa Rica, one occurring in February and one in July. Mexico has distinct breeding seasons in April and November. The breeding season follows the fruiting season, so the variability can be consistently different in each different region where they are found. It can give birth to two young at a time. The young stay with the mother, but are weaned by six months old. Sexual maturity is reached between one and two years old.

The two main threats to their survival are deforestation and hunting. Destruction and subdivision of their natural range can have devastating effects on their population. Loss of habitat can lead to exposure for poachers, who can easily kill many peccaries at one time.