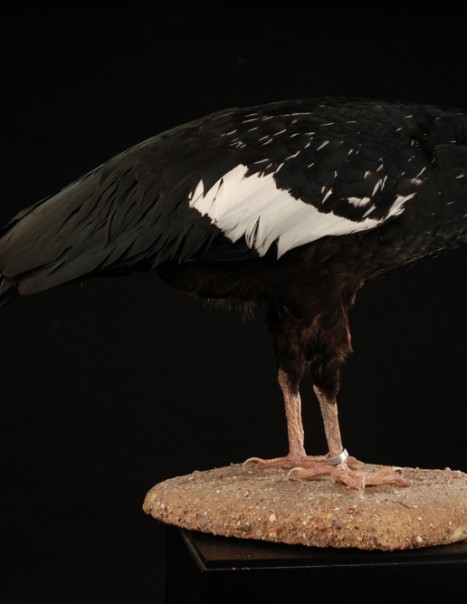 The blue throated piping guan is a South American bird of the Cracidae family. It is found in tropical rainforests in Colombia, Venezuela, Ecuador, Peru, Bolivia and Brazil.

There are two subspecies :

The blue-throated piping guan is similar in appearance to the turkey. It averages 69 cm (27 in) long, including its neck and tail, both long; the neck and head disproportionately thin and small, the tail disproportionately big. Most of the plumage is black with a greenish gloss—blue-green in cumanensis, olive in grayi. It has a large white patch on each wing, white flecks on the wing coverts and chest, a white patch over the eye and a white or buffy-white nape (and upper neck in grayi). Both subspecies have a short white or buffy-white crest; in cumanensis it is shaggy and nearly solid-colored; in grayi it is hairier, and the feather shafts are black, appearing as streaks. The beak is baby-blue at the base and cobalt-blue at the tip. Both subspecies have blue bare flesh on the throat with a wattle in cumanensis and a hanging caruncle in grayi. The legs are red.

During the breeding season it is noisy. At dawn it gives a “piping” call of 6 or so slow high-pitched, clear whistles, slightly ascending in pitch, “püüeee, püüeee, püüeee,…“, reminding the scale-backed antbird. Its flight display, at dawn or in the daytime, includes “2 quick wing-claps (often barely audible), then 2 whirring rattles with wings,” the second seeming to reverse the first as in shuffling cards. At other seasons it is usually silent.