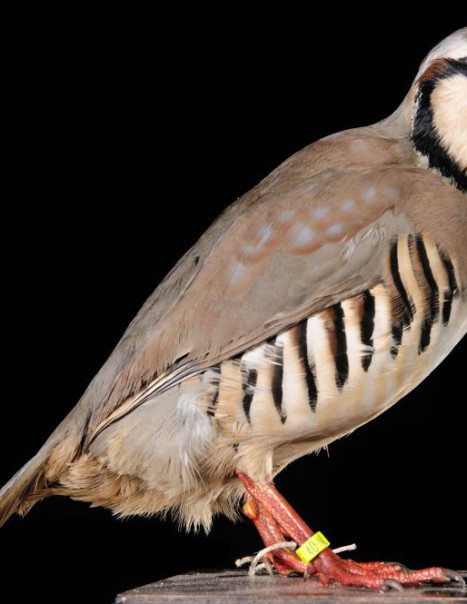 The rock partridge is a bird of the Phasianidae family.

It is a bird with plain back recalling Partridge choukars or red partridge, with a short red beak, red legs and a red tail visible in flight. At waist level, it is the largest of the partridge. Its back is brownish gray ash, the top of its chest is bluish gray, belly is pale red and flanks are striped with red, black and cream. Its beak and legs are red. It has pure white throat, a black stroke from the beak and little white behind the eye. It has a black line on the eye. The plumage of both sexes is the same. Due to the lack of sexual dimorphism in plumage, sex determination is not possible, except in spring when birds are observed in couples. The male is distinguished from the female by a somewhat stronger stature and by differences in attitudes.

It is active at dawn and during the day. The search for food is on the ground. This bird is suspicious and often remains impossible to spot. It flees usually walking up the slope nimbly and fly away when it is constrained by a man or a predator, always dipping below high speed.

Daytime and twilight, it spends most of its time on the ground and rarely perch on trees, except when snow covers the ground. It loves to bask in the sun in a tree of a bush or a rock, it appreciates the baths of ants. In winter, the birds stand on steep slopes facing south or on windswept peaks where snow does not take long. It then willingly approach herds of chamois and ibex scraping snow to peck up under their hooves.

Bird of the mountains of southeastern Europe, rock partridge meets the Alps to the Greek islands, Sicily and in the Apennines. Italy and Croatia are home to 60% of the total population ; after Italy , Switzerland is the most important Alpine country for the species, followed by France, Austria and Slovenia.