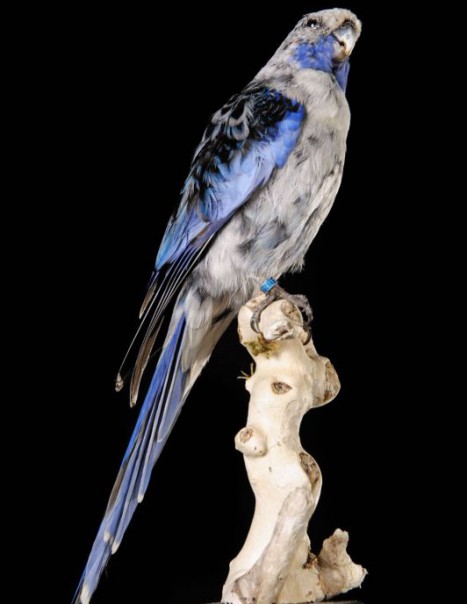 The eastern rosella is a bird of the Psittacidae family.

This species inhabits the southeast of Australia, New Zealand and Tasmania.With an average length of 29 to 33 cm for a weight of 70 to 100 g, the Eastern Rosella Parakeet has, as its name suggests, a very colorful plumage. The back feathers are black bordered yellow and yellow-green, head and upper chest are bright red, yellow belly, cheeks and chin are milky white, the bottom of the chest is yellow, the abdomen is light green, light blue rump, gray beak, dark brown eyes, and gray legs.The species has a sexual dimorphism, as the female head and breast are less red than the male. The young resemble the female, the back of their head and neck are green.

This species is found in woodlands and savannas up to 1300 meters, always near rivers, houses and cultivated fields or orchards where it can do great damage. It protects from the heat of the middle of the day hiding in the eucalyptus.

It feeds mainly on seeds, flowers, fruit and insects. Eastern rosella loves the hawthorn berries grass on the ground.

They are very sociable and live in groups in winter and separate per couple for reproduction which occurs in the spring. The female can lay, several times a year, 4 to 6 white eggs. A shaft hole usually serves as a nest. After 4 to 5 weeks they take their first plumage, but will be fed by the parents to their independence. After 5 to 6 weeks after birth, they leave the nest but will still be dependent for 2 weeks. They acquire their adult plumage at the end of their first year.