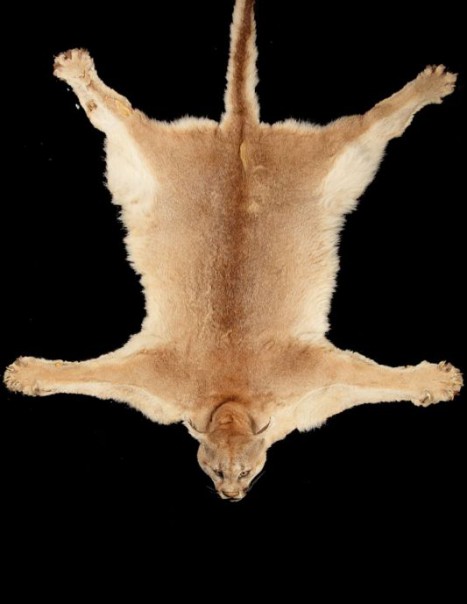 We realize a wide range of animal hides : zebra, lion, cheetah, polar bear…
Those carpets are available with or without felt.

The cougar is also known as the mountain lion, puma, panther, painter, mountain cat or catamount. It is a large felid of the subfamily felinae native to the Americas. Cougar belongs to the order Carnivora, and the class of mammals.

Resulting from the cat family, it is like a big fur cat and present a united adulthood varies between gray and fawn according to its geographical location. Its ears and its head are rounded. Unlike adults, the young has a mottled black fur. It measures between 1 and 2 meters when completed growth.

Carrnivorous, it feeds on meat from other animals living in the same areas as deer, sheep, rodents or birds.

Regarding reproduction, sexual maturity is reached after two years, the breeding season extends almost throughout the year and gestation lasts about three months. The female usually gives birth to three young and can give birth every two years. The young pumas learn hunting with their mother after four months and leave its protection around two years.

Their longevity is between ten years in the wild and twenty years in captivity.

The cougar is mainly distributed on Canada, North America, Mexico and South America. It can live in various environments such as marshes, plains, mountains or the rainforests and thus adapts to different climates.

There are a number of cougar subspecies, but this subject is subject to controversy: some experts have counted thirty while others argue that they are only six, including the “Florida panther”, the “puma concolor cougar” (Canada and northern United States) and “puma concolor costaricensis’, which are currently threatened.

A statement published on the Site World March 3, 2011 has also announced the disappearance of the “Puma is the American”, reinforcing the status of the most endangered species of the United States of puma. This animal is now protected in all countries except the Texas in the United States, where it continues to be hunted.