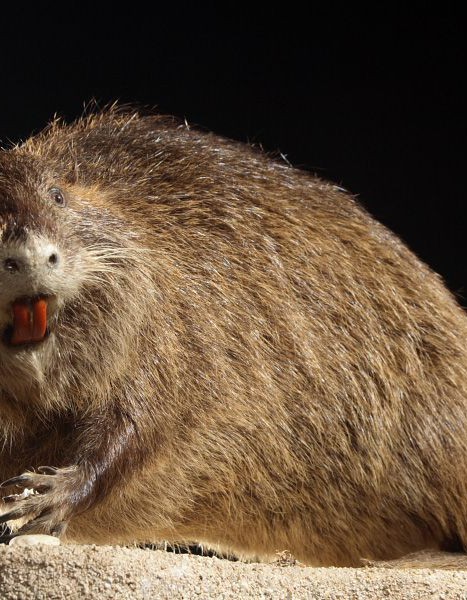 Also known as river rat or nutria, it is a mammal whose origins date back to South America. It was introduced in France in 1882 in the form of farms to benefit from its fur. Rebates in the wild is only made as from 1930. Today, the coypu is an animal that everyone can cross during a ride as it is present in 70 French departments. Cold is the main obstacle to its colonization. Indeed, recall that this animal is of tropical origin so its body is not adapted to the cold.

Its name Myocastor coypus, we note that it is nicknamed the beaver marshes. It indeed has a face close to the beaver. A cylindrical shank and bit hairy ends a body of great size. On its nose emerge very long whiskers. With small ears and small eyes, do not rely on its adorable as can weigh up to 12 kilos, the average weight being however 6. Four of its five toes are webbed, representing a real advantage in terms of the pool. Particular point of this mammal, its breast is not on its belly but on one side of its back. These are its teeth, its incisive specifically that make nutria is instantly recognizable: large and reddish orange.

Nutria lives in aquatic environments (see brackish, hence its nickname), it digs a burrow 6 to 7 meters to build its habitat, which can cause damage to the banks of rivers or channels. It can be seen living in huts, but this is less common.

For its herbivorous diet, nutria adapts to the resources of its territory, going into the human cultures.

The gestation lasts 130 days. These animals reproduce ideally in winter or fall, but any time of year can be the scene of giving birth to a litter. Famles can have two litters a year of 2 to 9 babies. They are autonomous from three months and reach sexual maturity at about eight months.