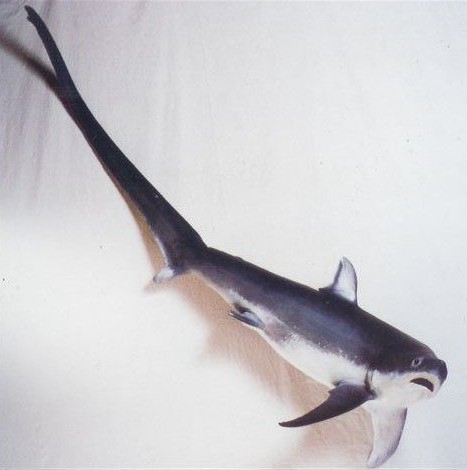 The Common thresher or common sea renard is a shark species of the family Alopiidés. Reaching almost 6 m in length about half of its length consists of the upper lobe of its caudal fin.

Its body is slender, the snout is short and sharp, the eyes of modest size and can be confused with the pelagic thresher shark. It lives in tropical and temperate waters worldwide but prefers cool temperatures. It can be observed both close to shore and at sea, from the surface to a depth of 550 m. It is a seasonal migrant who summers in the low latitudes.

This species feeds mainly on small schooling fish such as herring and anchovies. It is a good swimmer able to leap out of the water, in addition, it has physiological adaptations that allow it to maintain internal temperature warmer than the surrounding seawater.

It is a species Viviparous aplacental that feeds with underdeveloped eggs ovulated by their mother. Females usually give birth to four young at a time, after a nine-month gestation period.

This is a fairly robust shark with a torpedo shaped body and a short broad head. The dorsal profile of the head evenly curved down with a pointed conical snout. The eyes are moderately large. The small mouth is arched and unlike other thresher sharks has grooves in the corners. The teeth are small, triangular  and smooth edge. The common thresher shark is the largest species of thresher shark, it can commonly reach 5 m long and weighing 230 kg.

It lives in all tropical and cold temperate waters. In the Atlantic, it lives in Newfoundland to the Gulf of Mexico, the North Sea, in the British Isles, to Ghana, Madeira, the Azores, in the Mediterranean, Angola, South Africa, Tanzania, India , Maldives, Japan, Korea, China and Sumatra until Australia via New Zealand, Chile and the Gulf of California.

It is highly migratory, it moves to higher latitudes following the warm water masses. In the eastern Pacific, the males go farther than females. Young tend to stay in warm areas. It is a tough and fast swimmer, it can even jump completely out of the water. Immature individuals are prey for large sharks and there are no known natural predators.