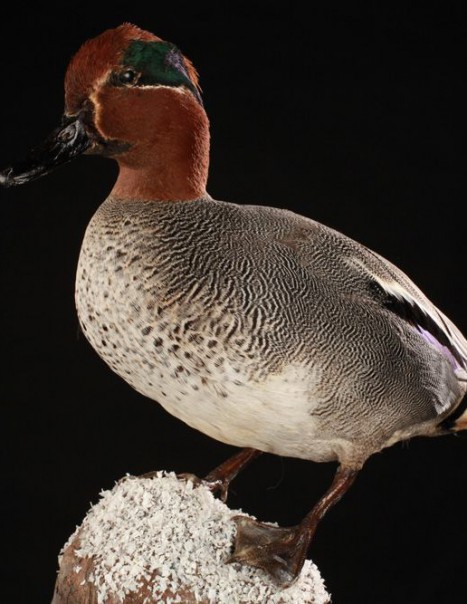 Eursasian Teal is the smallest freshwater duck in Europe.

Breeding plumage is very attractive: the head is red with a broad green stripe on the cheeks. The wings are marked with a thin white stripe on their front and a black and green mirror on the central part. The rest of the year, after the moult, the male carries quite dull colors like the female. It is entirely brown and beige.

It lives wherever they find water and food, provided there is not too much current. In summer it is found near ponds, artificial reservoirs, lakes with marsh vegetation and in winter it is found on large bodies of water sheltered, low and sandy coasts where it looks for the marine climate, lagoons and the marshes.
It is a very social bird, which is still in the group.

It searches for food at dusk and during the night. On the coast, rest or absence of activity coincides with high tide. They are dispersed and discreet during the nesting period. This is a partial migratory species. It is very sensitive to frost and snow that limit its power supply options. During the great cold waves, it is mostly present on the western and southern coasts as the Camargue, it now has taken the wild.

Its flight is very fast, generally low, and often in compact groups.

It lives throughout Europe in marshes, bogs often far from water discovery. The nest is placed on the ground in dense vegetation near water. Between April and June, the female lays between 8 and 11 eggs that are incubated for 25 to 30 days. The ducklings are precocial.

Teal feeds on small seeds and microscopic organisms that are in the silt they filter with their beaks. Its diet consists primarily of plant material that it harvesting on wet ground or slightly flooded along the ponds in the cornfields, in rice fields or swamps, it also feeds on micro-organisms, larvae insects, crustaceans and molluscs that fishing in brackish water, shallow mudflats by filtering the water with its beak.

Its lifetime is estimated at 16 years.