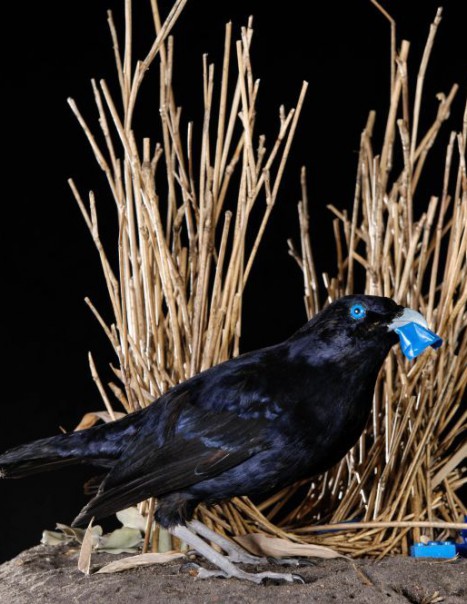 The male satin bowerbird has fully gleaming indigo-blue plumage. Depending on the light, purple or black reflections may occur. On the wings, primary flight feathers are blackish. Tertiary and above coverts are bright ends contrasting with blackish bases. Also on blackish tail on each rector, the end and the external piping are intensely iridescent indigo-blue. Its underparts, lower abdomen and thighs are duller and slightly more than the rest of blackish plumage. The coverts are blackish with glossy edges. The beak is whitish or pale greenish yellow with a bluish tint to the base. The eyes are bright purple with the outside of the iris deep blue. The legs and feet are light in color, usually pale pink. Outside the breeding season in winter bird groups are rather noisy.

The female has higher ash gray-green parts with wings and cinnamon brown tail. Beak is blackish. The eyes are deep blue. The legs and feet are flesh-colored or pale gray. Juvenile has duller plumage, rather greenish brown. Immature resembles female during the first three years of its life. It gets the adult plumage between the fourth and the seventh year.
The female sometimes imitates the cries of potential predators. It has a vast repertoire of sounds such as whistling and buzzing. It can mimic other birds as well as humans noise.
Satin bowerbirds frequent rain forests, woodlands and edges. In winter, the groups found in more open habitats such as parks, gardens and orchards.
It feeds mainly on plants such as fruits, flowers, leaves, seeds and nectar but during the breeding season, many insects are added to this vegetarian diet.
It can feed itself or family groups, and even with other fruit-eating species. Around food sources, the young birds are dominated by adult males. During the breeding season, the male feeds mainly on insects in a region near the crib. In winter they feed in large groups of more than 200 birds, consuming mostly plant matter. The woodland birds can move to more open habitats and form large flocks in winterParades of male satin bowerbird are well known. They occur near and around the cradle which comprises a layer of sticks placed on the ground. Then it constructs two parallel curved walls of each side of this layer of twigs, made of other twigs arranged vertically. This structure is similar to an avenue of about 45 centimeters long. Then, the cradle is decorated with bright blue objects preferably found in the home. We can then find flowers or berries, but also snail shells, snake skin and feathers, and even objects made by humans, such as pen caps or bottle caps and many others.The cradle attracts females who visit this strange and beautiful structure, while the male performs sublime parades. It takes an ornament in the spout while parading, adopting a posture in which it seems to be in a trance. Once the female is attracted, mating takes place on the cradle.

It quickly flies from one tree to another. Breeding season occurs between late August and early September and January. After mating, the female builds a separate nest cradle, a shallow cup made with sticks and twigs. The interior is lined with green and dry leaves. The nest is placed in a tree or a bush, between two and forty feet high, usually about fifteen meters above the ground. The same nest site can be reused by the same female where it lays  1 to 3 pale brownish eggs. It will incubate for about three weeks. The young leave the nest after 17 to 21 days after birth. They are sexually mature at the age of seven.

Both sexes have a life expectancy of 20 to 30 years of age.

There are two subspecies and the species is not currently threatened