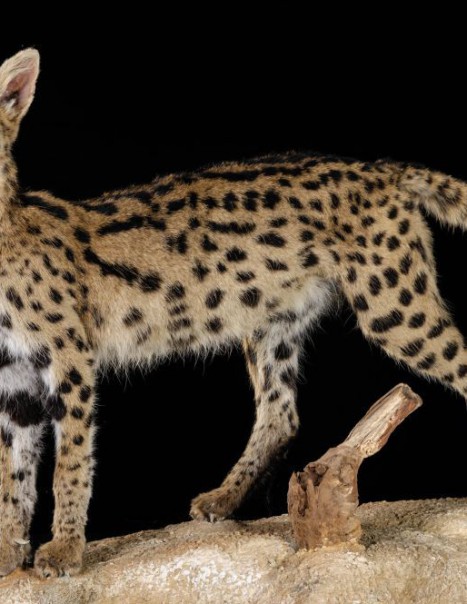 Serval – Felis serval
The serval is a big cat with big ears and is a carnivorous mammal belonging to the species Leptairulus serval living mainly in Sub Saharan Africa.It has everything of a good hunter and is a formidable predator of rodents, small antelopes, amphibians and birds.

Its spotted tawny tones coat serves as camouflage and its slender body of 1.20m long and 65cm at the shoulder allows it to sneak through the tall grass of the savanna. Its head is proportionately much smaller than the rest of its body and two large and wide ears are real antennas that await any noise. With a light weight of 9 to 16kg and long thin legs, it can run up to 80km/h and pounce on its prey.

The serval moves especially in savannas and wetlands steppes that have a water source because it drinks heavily in order to mark its territory by urinating up to 30 times a day.

Solitaire in the soul, this big cat has a social life twice a year, during the couplings. At this time, attracted by the mewing of females, the male leaves its solitude and must learn to live as a couple, sleeping and hunting with the female. After a week, mating occurs and the male is forced to find its celibacy. The female comes into gestation during 70 to 78 days and gives birth to 2 or 3 babies. These will remain with their mothers between 18 and 24 months, until sexual maturity.

Currently, serval is not considered an endangered species. However, vigilance is required. Long coveted for its speckled fur, serval has already disappeared at the hands of poachers in some parts of Africa. Very easy to tame, it is also the subject of a trade that must be controlled in order to prevent the disappearance of this wild animal in nature.