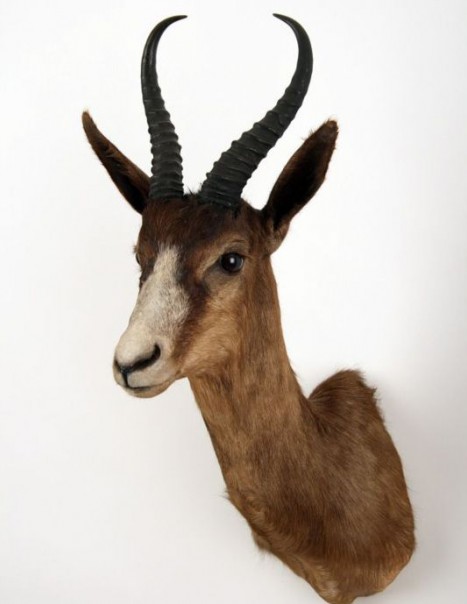 The springbok is a medium-sized brown and white antelope-gazelle of southwestern Africa.It is extremely fast and can reach speeds of 100 km/h and can leap 4 m through the air. The common name “springbok” comes from the Afrikaans and Dutch words spring = jump and bok = male antelope or goat.

The specific epithet marsupialis derives from a pocket-like skin flap which extends along the middle of the back from the tail onwards. When the male springbok is showing off its strength to attract a mate, or to ward off predators, its starts off in a stiff-legged trot, jumping up into the air with an arched back every few paces and lifting the flap along his back. Lifting the flap causes the long white hairs under the tail to stand up in a conspicuous fan shape, which in turn emits a strong scent of sweat. This ritual is known as stotting or pronking from the Afrikaans meaning to boast or show off.

Springboks are slender, long-necked antelopes, with a total length of 150 to 195 cm, and horns present in both sexes. Adults are between 70 and 90 cm tall at the shoulder, depending on weight and gender; they weigh between 30 and 44 kg for the females and 33 and 48 kg for the males. The tail is 15 to 30 centimetres long.

Their colouring consists of a pattern of white, reddish/tan and dark brown. Their backs are tan-coloured and they are white beneath, with a dark brown stripe extending along each side from the shoulder to inside the thigh. The face is white in adults, with a dark patch on the forehead, and a stripe running from just above the eyes to the corner of the mouth. The hooves and horns are black, and the tail is white with a black tuft at the tip.

There are three variations in the color of springbok pelage. In addition to the normal-coloured springboks there are also black and white morphs. Although born jet black, adult “black” springboks primarily have two shades of chocolate-brown and a white marking on the face. White springboks are predominantly white with a very light brown coloured side stripe.

Springbok inhabit the dry inland areas of south and southwestern Africa. Their range extends from the northwestern part of South Africa through the Kalahari desert into Namibia and Botswana. They used to be very common, forming some of the largest herds of mammals ever documented, but their numbers have diminished significantly since the 19th century due to hunting and fences from farms blocking their migratory routes.

The animal is present in Namibia, Botswana and Angola and South Africa

Springbok are mixed feeders, switching between grazing and browsing seasonally. When grasses are fresh, they mostly graze. At other times, they browse on shrubs and succulents. Springbok can meet their water needs from the food they eat, and survive without drinking water through dry season, or even over years.

Springbok are mainly active around dawn and dusk, although they may feed through the day in colder weather, or through the night at particularly hot times of the year. During the summer, they sleep in the shade of trees or bushes, although they often bed down in the open when the weather is cooler.[12]

Males and females form separate herds, although mixed sex herds are also common, with a roughly 3:1 female:male ratio. These groups are normally kept separate by territorial males, which round up female herds that enter their territories and keep out the males. Females may leave the herds solitarily or in groups to give birth. Mothers and fawns may gather in nursery herds separate from harem and bachelor herds. After weaning, female offspring stay with their mothers until a new young is born, while males join bachelor groups.

Gestation lasts 168 days, and results in the birth of a single calf, or, rarely, twins. The young weigh from 3.8 to 5 kg at birth, and are initially left under shelter, such as a bush, while the female feeds elsewhere. Mother and calf rejoin the herd about three to four weeks after birth, and the young are weaned at five to six months. Springbok typically leave their mother when she next gives birth, by which time they are normally about six to twelve months old. Females are sexually mature at seven months, but rarely mate during their first year, while males are mature at two years of age.Springbok live for up to ten years.