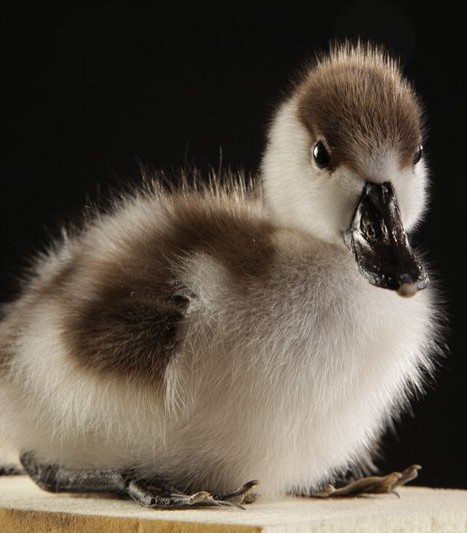 The common shelduck is a waterfowl species shelduck of the genus Tadorna.

This species is widespread and common in Eurasia.

The common shelduck looks like a small short-necked goose in size and shape. It is a striking bird, with a reddish-pink beak, pink feet, a white body with chestnut patches and a black belly and a dark green head and neck. The wing coverts are white, the primary remiges black and the secondaries green (only showing in flight) and chestnut. The underwings are almost entirely white. The whole gives a big colorful duck visible from afar. The male and the female are substantially identical.

In flight, all individuals appear black and white.

It is found along the coastline and along the flat, sandy or muddy marine coastal. But it can also be seen at the edge of the salt lakes near the mouths or estuaries. It also likes the grassy dunes. In July it makes a moult migration which gathers nesting and non-breeding adults. Once moulting is complete, they return to their country of origin. Shelducks have manners both day and night and are very sociable.

Its nest is located in a former rabbit or fox terrier in a crimped cavity in an embankment wall or even in a hole, it can be placed on the floor in the grassy vegetation. It is filled with down. From April to June, the female lays 8 to 10 eggs that the incubation period is 29 to 31 days. Young, like most precocial Anatidae, fly after 45 to 50 days.

Shelduck feeds mainly on bivalve molluscs, marine gastropods and crustaceans that it finds by sifting the mud with its beak. It supplements its diet with aquatic insects that it captures in the dunes and plant materials. It usually feeds in shallow water on the mudflats and fields sometimes far from water.

Its longevity is around 15 years.