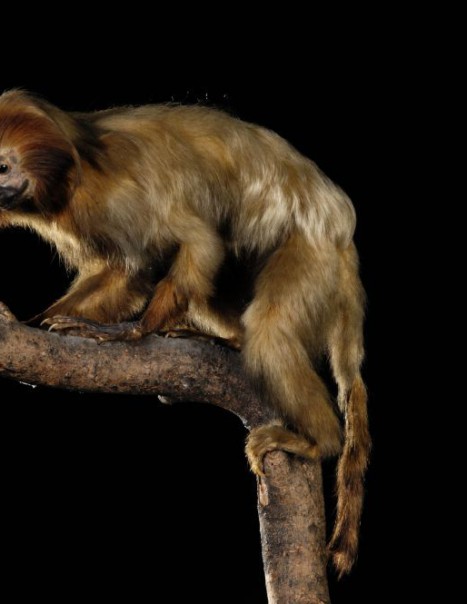 The lion tamarins or small lion tamarins  form a genus of monkeys who belongs to the family of callitrichids as marmosets, tamarins and Callimico.

Four species are known today, identifiable based on the share of gold and black in their fur.

Unfortunately all the four species are threatened in the near future, due to deforestation.

Slightly larger 26 to 30 cm and 500 to 700 g heavy as marmosets and tamarins, small monkeys lions have long, thin arms, a narrow palm and an elongated index, all of anatomical adaptations for promoting research of insects and larvae under the bark, in crevices or in the litter. This giant finger found is more exaggerated in the dactylopsila- a marsupial from Australia and the aye-aye – a Malagasy lemur.

Little monkey lion is distinguished from all other callitrichids marmoset and tamarin. By its technical food excavation but also by its reproductive system. In this species, there is no mechanism inhibiting female reproduction. The girls of the dominant and subordinate females continue to have normal ovarian cycles in its presence. This reproductive strategy would offset greater rigidity in the choice of habitat. The farming community is small and the male has the majority support two weeks after birth.

Three of the four species like primary forest. This is where they find the ideal dormitory, a hole in the trunk of a tree in decomposition will shelter them from weather and predators.

It has become a symbol of nature protection in Brazil.