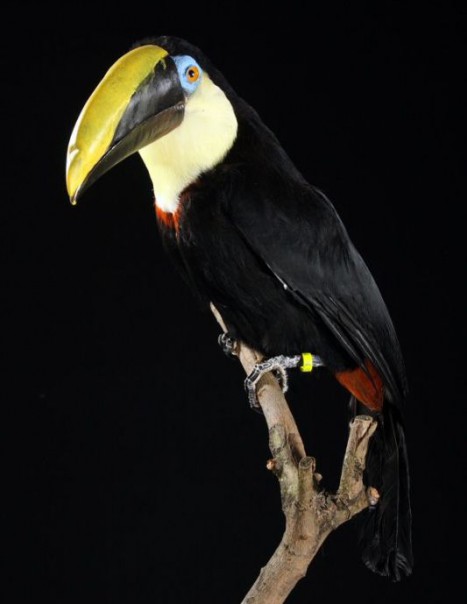 The white-throated toucan is a near-passerine bird.

Formerly 2 subspecies were recognized because of their beak colour which differs :

Male and female are identical. The plumage is black, except the cheeks and large white flap that covers the chest and the abdomen is bounded by a thin scarlet cross border. The beak is red with a yellow edge which covers the upper mandible. The trick of the eye, covered with bare skin, is blue. The rump is yellow, the covers coverts are red.

The male often sings loudly from the treetops and its voice carries almost a kilometer. This toucan sings at dawn in the morning, before and after the rain and at the end of the afternoon. Basically, all opportunities are good throughout the year, to launch its melancholy cry. The female sings as well.

It attends the Amazonian forest land protected from flooding, in which it displays a preference for middle and upper floors of vegetation. It is mainly found at the edge of woodland and up to 1100 meters. At the end of the rainy season in June and July, toucans may suffer from lack of resources. Some years they have trouble finding something to eat, because there is more than ripe fruit in the forest. Racked with hunger, they then head to the coast that benefits at that time, fruit trees, including palms. It is for them a matter of survival. Of course, once the right time back, they come back into the forest.

The White-throated toucan nests in cavities and lays its eggs in existing holes to a respectable height from the ground. These, the number of 1 to 4, are entirely white and incubated by both parents for a period ranging from 16 to 18 days. The parents then feed them with regurgitated food. They still retain the nest for six weeks.

They especially appreciate the fig fruit, wood barrel, palm trees. More fruits are ripe, more attractive they seem to it. Berries are swallowed, while larger fruits are skinned with the beak. Primarily frugivorous, white-throated toucans also eat insects, small reptiles, eggs and chicks, that are useful for their protein intake, especially during the breeding season.