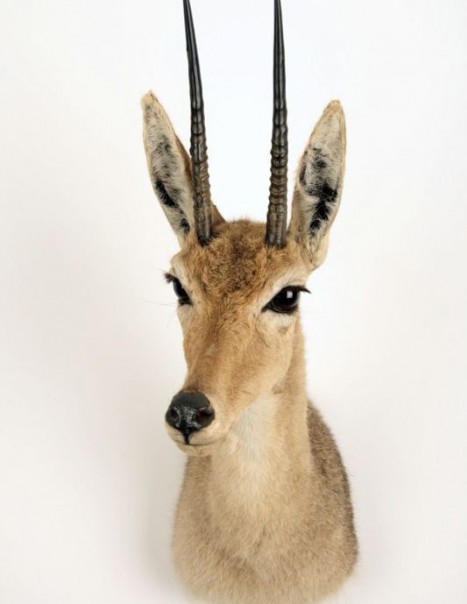 We find this antelope in South Africa, Zimbabwe, Lesotho, Swaziland.

The grey rhebok is a medium-sized antelope weighing 19 to 30 kg with a long neck, narrow ears, and straight, sharp horns in the male. The horns are ringed at the base and are around 15 to 25 cm long. Only the males carry the straight horns. The coat is short and dense and coloured in various shades of grey.

Confined to the higher areas of Southern Africa, they typically inhabit grassy, montane habitats 1000 metres above sea level and carry a woolly grey coat to insulate them from the cold. However, they are not strictly limited to this habitat as they can be found in the coastal belt of the Cape, almost at sea level.

The grey rhebok is territorial and maintains its territory by urinating and defecating, standing or walking in an upright posture and patrolling. Males become extremely aggressive during the breeding season. The grey rhebok usually aggregates in herds of 1 to 15 females and young and one mature male. This species is therefore polygynous. The grey rhebok is a seasonal breeder, with mating taking place between January and April. Females are pregnant for about seven months and give birth to a single calf in late spring and summer and from November to January in the Southern Hemisphere.

The grey rhebok is listed as least Concern with the population estimated to be at least 9.800 individuals and perhaps as high as 18.000. The uncertainty regarding the exact number is due to extensive areas of the species’ range not having been surveyed or where estimates are unavailable.