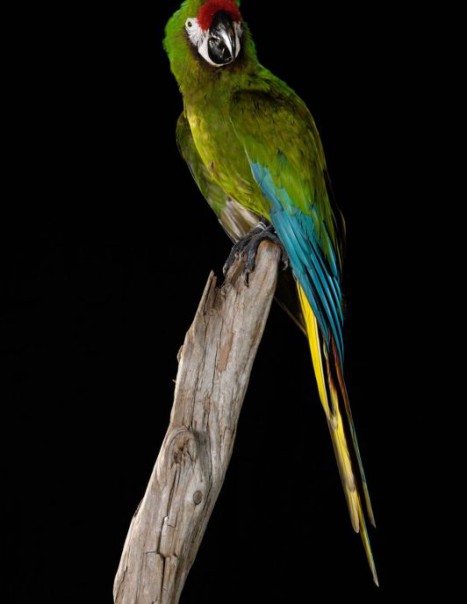 Military Macaw – Ara militaris
Very similar to Buffon’s macaw, military macaw is smaller in size and darker in plumage. Its lifetime is estimated at 60 years. Adult has green plumage on the upper parts, slightly tinged with olive green on the back and wing coverts. Flight feathers are blue. The above-coverts, lower back and rump are blue. Graduated tail is brownish red with the ends of feathers blue. On the underparts, body is green. The coverts are blue. The tail is olive green. The underside has green blankets and olive green feathers. The throat is olive-green, the strong beak is blackish. The eyes are yellow. Legs and feet are dark gray and both sexes and young are similar.

The differences between these three subspecies are dubious and indistinct. It lives mainly in temperate mountainous, semi-arid and tropical forests near water. It is visible from 600 to 2600 meters. It moves seasonally to the plains and then frequent rain forests and thorny woodlands, in Mexico to Bolivia, northwest Argentina and western Venezuela.

It lives in pairs or family groups and feeds on nuts and fruit in the palms and ficus. This arboreal species feeds high in the trees and in the canopy. When they sit at mid-day, they perch on exposed dead trees and at the top of the branches. It makes seasonal movements to find very specific fruits.

It wanders locally in many areas. Its flight is fast and direct, with slow, shallow wings beats. It can reach speeds of 55 km per hour. It is often noisy in flight. It reaches sexual maturity between 2 and 4 years. The breeding season is from January to March, but can vary depending on location.

It nests in cavities in a hole in the top of a tree, in the cliff faces in the canyons, in rock crevices, about 200 meters above the ground. The female lays 2 to 3 white eggs. Incubation lasts about 28 days to a month, by the female. Male feeds outside the nest during this period, as it brings it food for chicks. The young leave the nest about 12 weeks after birth, they are monogamous and remain together for life. They perform aerial acrobatics during courtship.

It feeds on seeds, nuts, fruits, berries and vegetable matter when it is in the trees. It is able to break and open fruit with very hard shells, thanks to its strong beak. The Military Macaw, as other Psittacidae, visits the clay mounds along the banks of rivers. These birds gather at these locations to lick the clay that has the power to detoxify poisons contained in the plants they eat.

It lives in remote areas and this species is endangered and sensitive to the loss of habitat.