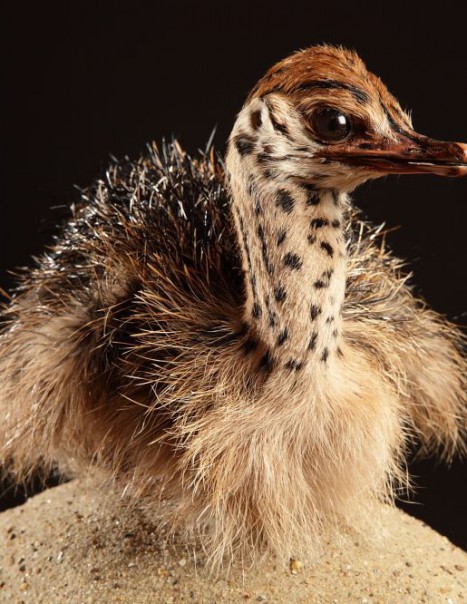 The african autruchon is the name given to the birds of the genus Struthio, the family of Struthionidae. The autruchon is the baby of the ostrich, adult bird will be really tall, 1.90 m on average for females, 2.50 m for males with a weight of 90 kg on average for females 150 kg for the largest male. Ostrich is a flightless bird. Life expectancy is about 70 years and 40 years in captivity. It also represents the largest birds of all time after the elephant birds. It is on the list of endangered species.

The ostrich is the fastest land birds. It moves by walking. Thanks to its very long muscular legs, its flexible and supple knees, ostriches are very quick and enduring. Thus, they can run at a speed of 40 km/h for half an hour and reach a sprint at an average speed of over 70 km/h. With peaks close to 100 km/h on very short distances, it is faster than the lion. The ostrich can jump 1.50 meters in height and 4 meters in length. Its legs have only two fingers, she sits on the inner finger, the most developed, when short. The ability to fly has been replaced by the power of the legs, which allows it to run as fast as mammals. In adulthood, the head and the ostrich neck are bare or lined with a thick down. The body plumage is abundant. The wings are short but normally made. There is significant sexual dimorphism: the male has black plumage with the white tip wings while the female has a dull brown plumage. Their eyes are usually larger than their brains.It lives in Savanna most of the time but goes in damp places to lay .They are primarily herbivores but their diet is varied; they are able to ingest anything that comes within reach of their beaks.

The egg of the ostrich is the largest living animal egg shell and therefore the larger cell of the animal kingdom.