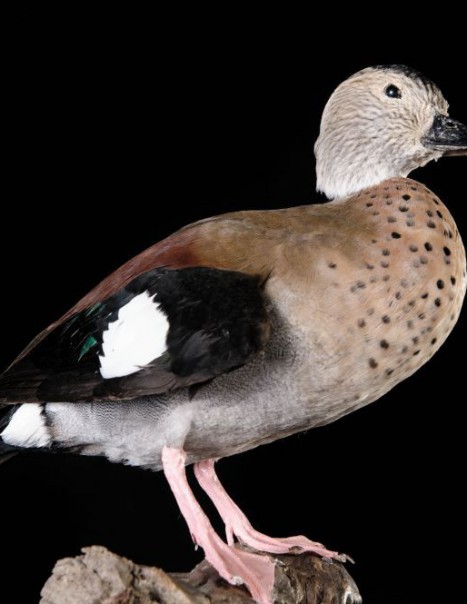 The ringed teal is a small duck of South American forests. It is the only species of the genus Callonetta. Usually placed with the dabbling ducks, this species may actually be closer to shelducks and belong in the subfamily Tadorninae; its closest relative is possibly the maned duck.

The male and female remain colourful throughout the year, lacking an eclipse plumage. The drake has a rich chestnut back, pale grey flanks and a salmon-coloured breast speckled in black. A black band runs from the top of its head down to the nape. Females have an olive-brownish back with the head blotched and striated in white, with pencilled barring on a pale chest and belly. Both have a dark tail, a contrasting pale rump, and a distinctive white patch on the wing. Bills are grey and legs and feet are pink in both sexes. Pairs easily bond. Their contact calls are a cat-like mee-oowing in ducks, a lingering peewoo in drakes.

The ringed teal breeds in north-west Argentina and Paraguay, also occurring in Bolivia, Brazil and Uruguay. Their habitats include tropical, swampy forests and marshy clearings in well-wooded lowlands, as well as secluded pools and small streams.