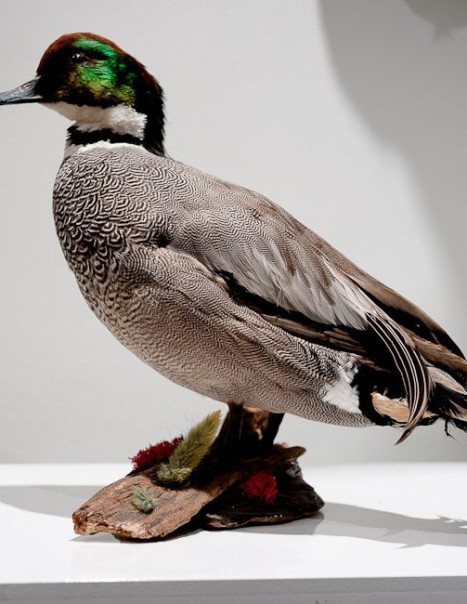 The mallard, also called wild duck, is the most common of all ducks. Widespread and can be found both in urban parks as remote waters. It is a large dabbling duck.

Mallard adult male in breeding plumage has gray body. On the top, the back is dark gray. The lower back, rump and upper tail coverts are black.

The head is iridescent green bottle, separated from the body by a narrow white collar. The beak is olive-green to yellow. The eyes are dark brown. Legs and webbed feet are orange. The male inter nuptial resembles female but its beak is greenish yellow. Juvenile is similar to female but darker.

There are seven sub-species that vary in size and color of the plumage.

It is found in all kinds of wetlands with fresh, brackish or salty. It needs shallow water with vegetation that can provide a cover to hide.
Outside the breeding season, it can be seen in estuaries, sheltered bays, coasts and mainly at low altitude.

Widespread in the northern hemisphere, except in the tundra, high mountains and deserts. The species was introduced in Australia and New Zealand. This omnivore eats, aquatic vegetation, invertebrates, amphibians and some fish. It can also graze on the floor. It is shy and cautious, but in the urban habitat, it can become more domestic.

Pairs form in late autumn and a couple forms every season, because the links are cut just after laying.