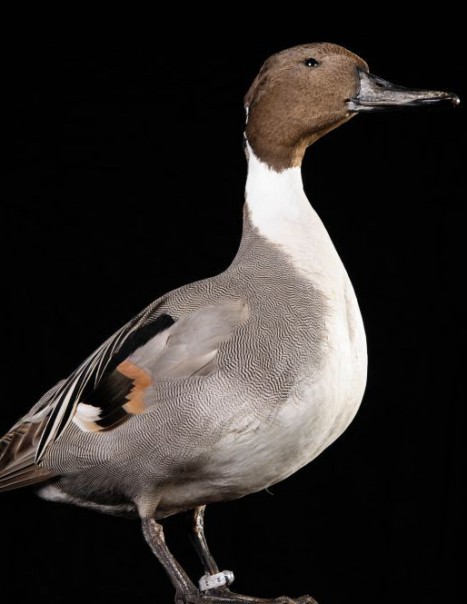 The northern pintail is a species of dabbling ducks relatively common and widespread in the northern regions of Europe, Asia and much of Canada, Alaska and the western half of the United States. Unusually for a bird so widespread, it has no geographic subspecies over most of its range, except for the Kerguelen Pintail – Anas eatoni eatoni – and the Crozet pintal – Anas eatoni drygalskyi  – which are considered as separate species by some authors.

This duck has an elongated head, a long white neck and a long tail from June to October. It gives the impression of being longer than the mallard while males only measure 65 and 75 inches, females are smaller of 50 to 55 cm. Its adult weight is between 600-1050 grams

The long tail is tapered black and yellow cream, black on top. The beak is rather long and narrow. A green bronze mirror adorns the central part of the wing. The belly is white. Like other waterfowl, there is a strong sexual dimorphism. The male has a chocolate brown head, white neck which is extended by a white band that goes behind the cheeks. The end of the wings is black. The beak is steel blue. In eclipse period, the male resembles female.

It is a bird that migrates over long distances. It goes south in winter to sometimes reach the equator.

It feeds on plants, mostly in the evening or night. During the nesting period, it also eats aquatic insects and shellfish. The nest, built in dry conditions but not too far from the water, is a shallow bowl, dug in the ground and lined with plants.

Its nesting area is located north enough, some specimens migrate until tropics. Adults can fly to escape terrestrial predators, but females brooding are particularly threatened by large carnivores such as bobcat. The large raptors such as goshawks that can capture these ducks to the ground, and some hawks, including the gyrfalcon, they have enough speed and power to capture these birds to fly.