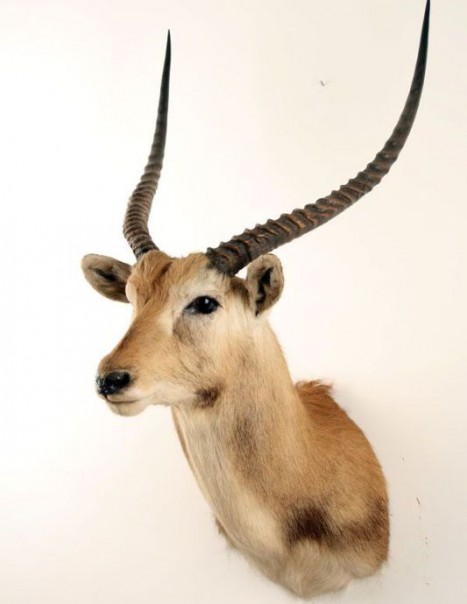 Lechwe has a bit fast race because of its long and separated hooves that are adapted to its semi-aquatic life. It is suspicious and remains near the points of water for refuge and dive in there in case of danger. However, it is the fastest antelope wet and marshy ground, it can run there around 70 km/h and outrun all predators.

This herbivore antelope feeds on grasses and aquatic plants, it is sedentary, most of its activities taking place during the cool moments early morning or late evening. It is very sociable, it lives in groups of tens to hundreds of individuals.

Mating takes place throughout the year, during this period the male occupies an elevated place to be seen by females and rivals. The ringed horns are then used in the fighting that establish the hierarchy. These fights are rituals but not violent. The strongest male chooses the females for its harem.
The female gives birth to a baby of 5 kg after 7,5 months approximately of gestation. It remains hidden in the tall grass in the absence of adults. Nursing lasts 4 months. The sexual maturity is reached at 2½ years for males and 18 months for the female.

During the dry season, it has many predators: lions, leopards, cheetahs, wild dogs, hyenas, pythons and even for young people who are the most fragile, jackals and birds of prey. Despite these natural predators, human remains solely responsible for the carnage.

The average lifespan is 10 to 15 years in the wild and up to 20 years in captivity.
it is estimated that in 1930 there were a million Cobes Lechwe today there would be only 98,000.