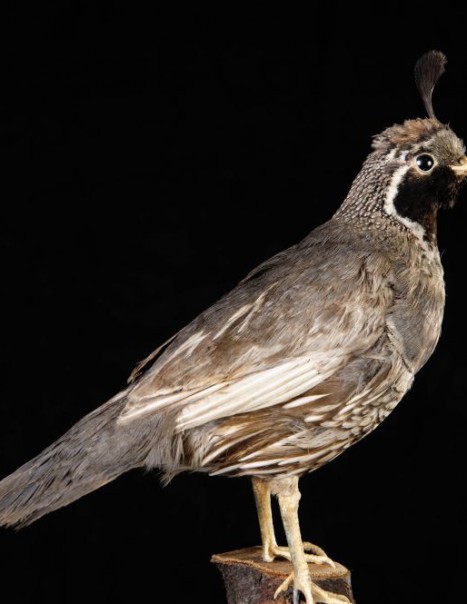 This species belongs to the order Galliformes and Odontophoridae family. Eight races are known.

California quail is a plump bird with an odd tuft of feathers moving to the front of the cap. This beautiful bird is the emblem of the State of California.

The adult male has blue-gray and brown plumage, the upper parts are gray on the back, rump and tail. The wings are brown and rounded. On the head, the cap is reddish-brown, lined with alternating black and white stripes. The forehead is light brown, and the color extends to the eye and down to ear coverts and sides of the head. The face, chin and throat are black edged with a white band that joins the back of the eye. The neck is finely mottled black and white extending over the sides of the neck. You can see a remarkable long black feathers forelock projected forward from the front. The short beak is black. The eyes are dark brown. Legs and feet are gray. The female is duller. It does not have as sharp facial and the young have colored buff ends on the first wing covers.
It emits several kinds of vocalizations, sometimes wheezing.
Its native habitat was the southwest United States but the species was introduced in Chile, Argentina, New Zealand, Australia, Hawaii and British Columbia.
It attends brush, cayons with oaks, deserts, grasslands, crops, green forests and edges, but it can also be found in other habitats such as urban parks and gardens.

It feeds on seeds and plant bulbs, Lupins, Lotus and barley. It scratches the floor and picks leaves in vegetation. It feeds on the ground where it walks or runs easily.

Birds eat and sleep in groups throughout most of the year.It seems that the species is monogamous. Males parading expose the most colorful parts of their body and their head by lowering the wings and deploying them, and adopting frontal or side postures. It takes dust baths in groups on the sunny areas. Its flight is short but supported with fast beats. Breeding season occurs from early April or May to June (north) until July or August. The nest is on the ground, lined with grass. It breeds in brushy areas and open forests. The nest is usually protected by a shrub, a tuft of grass or other vegetation. The female lays 13 to 17 eggs. Incubation lasts about 22 to 23 days, by the female. The young are reared by both parents.