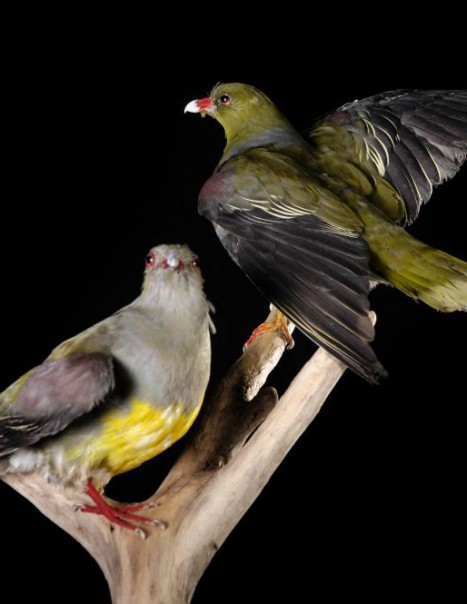 The Bruce’s Green pigeon is a species of bird in the Columbidae family.

They are native to Africa south of the Sahara and north of the equator. They are sedentary. These pigeons move north during the wet season. In Saudi, they perform altitudinal movements, leaving the mountainous areas to reach the plains during the winter season. They attend oasis and wooded valleys. They are also found in semi-arid savannas feature acacias in grassland with tree galleries and forests

These birds are highly dependent places where fig trees are abundant. They are common near the cities and villages, even in areas where they are persecuted by hunting. These pigeons live from sea level up to 2000 meters.

They can form groups, mixed group, that often reach ten birds. The breeding season runs from December to April. In Mali, it takes place from December to June. Reproduction occurs from April to September in Ghana, from March to April in Nigeria, from January to April in the Sudan, from November to May in Ethiopia in January and February in Socotra. In the southwest of Arabia, egg deposition takes place from April to June. The nest is a flimsy platform built 3 meters above the ground on a horizontal branch or in a thick tangle of branches. The bird directs its anal area towards the predator, because the feathers of this part, is much like the color of the bark.