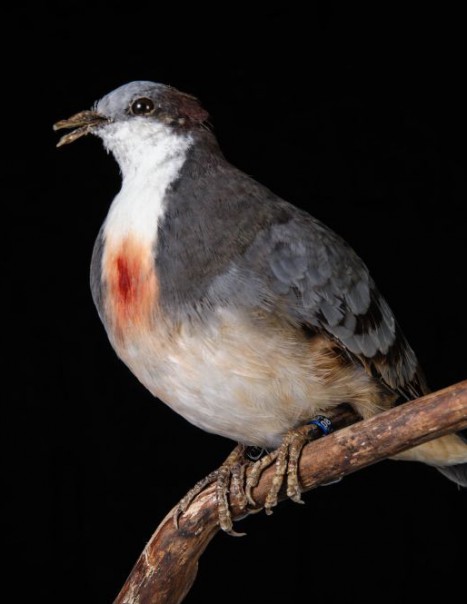 The luzon bleeding-heart belongs to the family of Columbidae.

There are called “bleeding-hearts” because of a splash of vivid red colour at the centre of their white breasts.

The Luzon Bleeding-heart is the species in which this feature is most pronounced and at first sight it is hard to believe that the bird has not recently been wounded. A reddish hue that extends down the belly furthers the illusion of blood having run down the bird’s front.

It is a bird inhabiting forests mainly found in the Philippine archipelago, on the island of Luzon and Polillo. Although the name of the bird, this species is said land and spends most of its time on the ground. Its nest is perched to one or two meters from the ground.

It has a rather special coat. The forehead is pale gray blue. The shell and the upper parts are rather dark gray with dark purple metallic sheen. The underside is brown. The front of the body is white except at the location of the task, giving its name to the species; bright red with a rather vertical line, which was the task. The legs are also red. The eyes are purple colors, surrounded by gray. The beak is completely gray.

It feeds on seeds, berries and some invertebrate animals.

Extremely nervous and reserved, this dove lives alone or in pairs. It is an oviparous animal, that is to say, it lays eggs. The parade takes place throughout the year. The male inflates his chest and coos. Copulation takes place mainly on the ground. Then, the female lays two eggs. Monitoring eggs before hatching occurs between 16 and 18 days by the female the day and by the male during the night. After hatching, the young can fly after 10 to 14 days. Young people acquire their adult plumage after twelve weeks.

It is an endangered species because of deforestation.