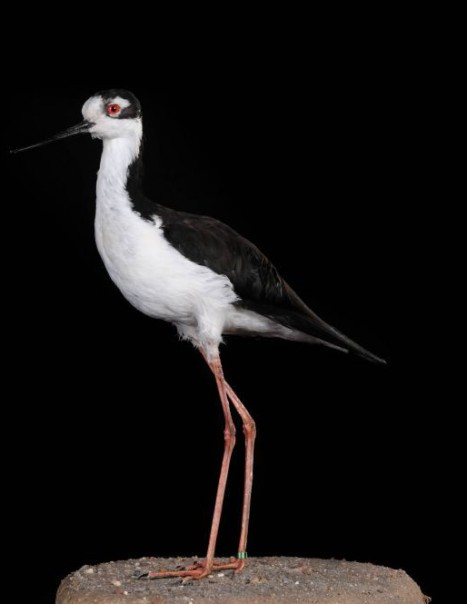 The black-necked stilt belongs to the Recurvirostridae family.

The coat color, head, back of the neck, neck, back and wings are black and shiny. Underparts, throat, chest and abdomen are white. On the head, forehead and lores are white, above the eyes it has a white spot. The tail and rump are white. It has very long legs with bright red or pink fingers. Are partially webbed fingers, allowing the bird to swim, its eyes are brown. The beak is long, very thin and black. The female is similar but darker than the male on the back and the juvenile is brown on top.

The black-necked stilt breeds and winters in a wide variety of wetland habitats: mudflats, ponds and grassy marshes, brackish or freshwater lakes. It breeds in the United States, the Caribbean, Central America to South America, Hawaii where lives a
subspecies. It winters from southern United States southbound.

It feeds in shallow water, it wades or swims. It locates its prey in sight. Sometimes it puts its head completely under water, sweeping with the head and beak. It runs very fast and suddenly stops to peck for food on the ground. It is noisy, territorial and aggressive during the breeding season. It flies low over the intruder with loud cries of alarm.

Adults can perform several anti-predator parade of encircling the intruder beating wings. The black-necked stilt is very gregarious outside the breeding season. It lives in a warm environment and must cool the nest frequently. It can bring water stored in its ventral feathers to the nest, sometimes doing a hundred trips. It does not fly very fast, but its flight is powerful and safe.

Its durability is up to 5 years, they have a length 40 cm and weight of approximately 160 gr.
The black-necked stilt nests on the ground, in colonies from June to October. Both adults choose to lay their nests on an island or in a swamp. They build it in May. They choose the place that offers them a complete view of the marsh. The nest is made with dry herbs and add to as the season of dry twigs, grass roots, pieces of shells and other debris. The nest must be high enough to be safe from flooding.

The female lays 3 to 4 brown eggs, spotted and Incubation lasts about 22 to 25 days by both parents. The chicks leave the nest within two hours after birth, they are fed by adults and they reach sexual maturity at the age of one year. This species produces only one brood per year.

The black-necked stilts populations are affected by the decline of wetlands and habitat loss, but the birds use the structures built by man and thus extend their habitat.

Hawaiian subspecies is endangered due to hunting, habitat loss and by introduced predators.