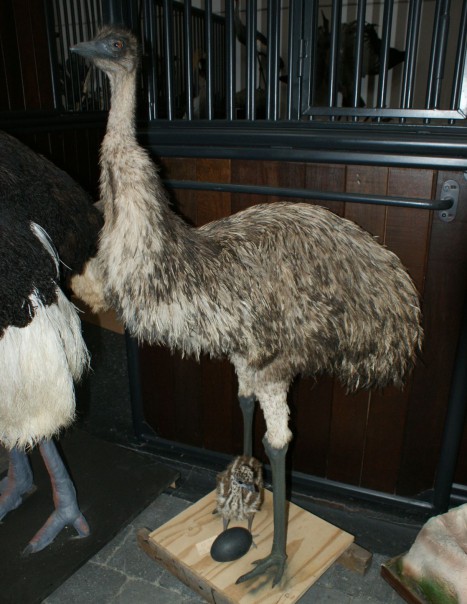 Emu is the only bird alive in the Dromaiidae family.

This bird of Australia is the second largest bird in the world after the ostrich. It is distinguished from it by its size up to two meters and its feathers that cover  its head, its neck and its thighs. An adult emu typically weighs 30 to 45 kg but can also reach 55kg. The female is usually heavier than the male.

With powerful legs, its developed muscles, the length of its legs and the number of fingers, the bird can run at very high speed. Its specificity lies mainly in its paws, whose strength is comparable to that contained wings of other bird species. The emu also has two small wings that do not allow it to fly. As for its feathers, they are characterized by two spine. They play an important role in thermal regulation because the bird can refresh waving. The black feathers absorb much of the heat without transmitting it directly to the skin through a down coat that protects it. This ability to regulate temperature makes the emu a species that can adapt to all seasons.

Unlike most birds, emu rather omnivorous diet varies from season to season. Nevertheless, it has a certain preference for highly nutritious plants. In summer, it feeds mainly on insects and small vertebrates and may well resist the lack of water.

The mating takes place every day or every 2 days. As for the egg, it is done every two to three days. Each clutch is an average of 5 to 15 eggs, even twenty. It is the male who assumes brooding for several weeks while the female is away to find another male with whom to mate. The female can have several broods each year. However, all the eggs will not reach the stage of hatching chicks and only a few survive to adulthood because dingoes, foxes and wild pigs are a constant threat.