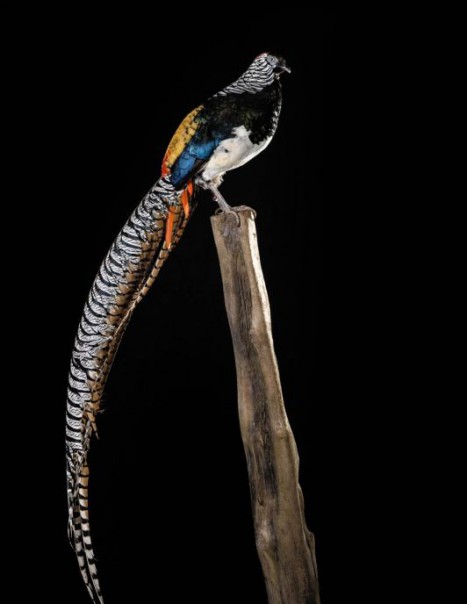 This bird belongs to the order Galliformes and the Phasianidae family.

The Lady Amherst’s Pheasant is endemic in southwestern China, Southern Thailand and the Malay Peninsula. The species was introduced in Britain where there are small populations, particularly in Bedfordshire.

The adult male has the mantle, back, scapulars and the dark bluish green chest feathers with black edging giving scaled effect. The above-coverts are black and white. Red and orange mingle with these designs. The longest feathers have orange pointy ends. The rump is yellow buff barred bluish green.

The long tail is arched and pointed, barred black and white with regular dark vermiculations. Throat and anterior neck are blackish. The white abdomen sharp contrast, while the covers under tail and belly are white but barred black. A beautiful white and black collar to the drawings in the form of flakes adds an undeniable touch of elegance to the appearance of this pheasant. The beak is pale blue-gray. The eyes are white, surrounded by a light blue gray bare skin eye ring. You can see a small yellow wattles under the eye. The legs and feet are light blue and the male’s legs wearing spurs. The female has reddish brown plumage, regularly barred with black. The underparts are generally lighter than the top. Young resembles female but it is clearer and bars are less distinct. The young male begins to get the adult plumage from the first fall.

It is found in forests and wooded hills, bamboo groves, thick brushy areas and secondary forest and is visible between 2100 and 3600 meters.

The nest is on the ground, often under a bush or in the shelter of a dead branch, the interior is lined with dead leaves. The female lays 6 to 12 buff cream eggs. She incubates alone for 24 days. The chicks are precocial and leave the nest almost immediately after birth. They are already able to feed themselves but they follow the female that leads them to food sources. The family never returned to the nest.

The species is not threatened.