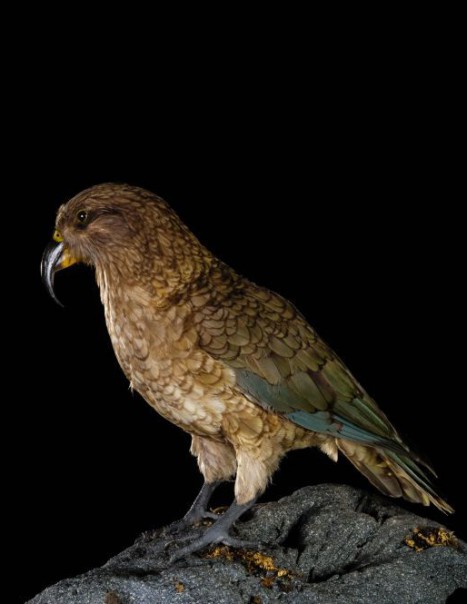 Its head is olive-brown color, wing covers are bronze-green with blackish streaks and borders crescent. The back and tail are orange-red with dark tips. The beak and wax are brownish black, the iris is dark brown and legs are brownish gray. Males are larger than females.

They live from 600 to 2400 m above sea level, mainly in New Zealand. They are found near homes and tourist sites and summits in the valleys, it is a familiar and curious bird, which often lets approaching. It likes to live near homes and feel the human presence. Its mischievous behavior and its keen intelligence earned it the title of “clown of the mountains”.

During the breeding season, the pair is the basic social unit, but the rest of the year, it lives in family groups and feeds into bands of 30 to 40 birds.Males are polygamous, its harem is made up of about 4 females and dominant males are not necessarily older. Their territories are variable in size, but often near the nest remains an inviolable space. During the nesting season, breeding birds are definitely sedentary never away for more than a kilometer from the nest. They fly high in the sky, high above the valley bottoms in large noisy flocks.The breeding season runs from July to January. The female lays 2 to 4 white eggs in a burrow or in a strain of cavity lined with some twigs, leaves and moss. The female incubates alone for a period ranging from 21 to 28 days. Meanwhile, the male stands guard nearby and is responsible to feed its companion. The chicks fledge after 13 or 14 weeks and continue to be supplied by the parents for 1 month to 6 weeks.

Keas feed on carrion and sheep carcasses. They also have a vegetarian diet and they search for food both in trees and on the ground, where they look for leaves, buds, roots, seeds, berries, flowers, nectar and insects.

Their lifespan is estimated at 14 years and since 1988, it is completely protected.