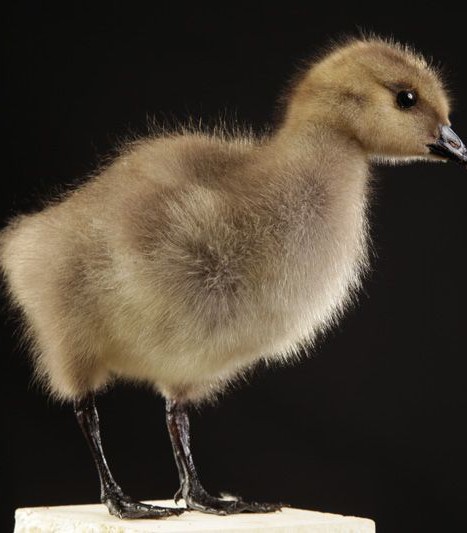 Gosling is the little of the goose and also the swan.

The swan goose  is an exclusively Asian species. Its nesting space is highly fragmented, Altai, Mongolia to Sakhalin and the northern coast of China. Its winter range is from Japan, Korea, Eastern China.

In cygnoides geese, although the male is larger, longer, and it has a stronger beak and a longer neck than the female, it is considered that the sexes are identical. Among the gray goose, this species is distinguished by the contrasting color of the head and neck very characteristic: the crown and back of the neck dark brown contrast indeed with the throat, sides of the head and front of the neck brownish very pale. A white line more or less apparent encircles the base of the beak. Juveniles are quite similar to adults.

During nesting, it frequents marshes, edges of fresh or brackish water lakes, wooded and unwooded steppes, deltas, meadows near the valleys of the rivers, in the mountains.
In winter, they approach the coast and can then be observed in the coastal plains, swamps, lakes, rice fields, estuaries, beaches and even beaten by the tides.

The geese are grouped for the post-nuptial molt and leave the breeding grounds from mid-August to mid-September. They rarely swim except during moulting or nesting.
In April, it arrives that  on the breeding grounds in the meadows and marshes, many couples live together when the places are favorable. The nest, built of grass and reeds, is placed on a mound in a dry place among the thick vegetation near water. Often built in a strategic location on a small river island, away from predators. Laying begins in April or May; the female usually lays between 3 and 9 eggs. After hatching, the goslings from different broods gather in bands.

They feed after dark. They eat aquatic plants, reeds, sedges or sedges.