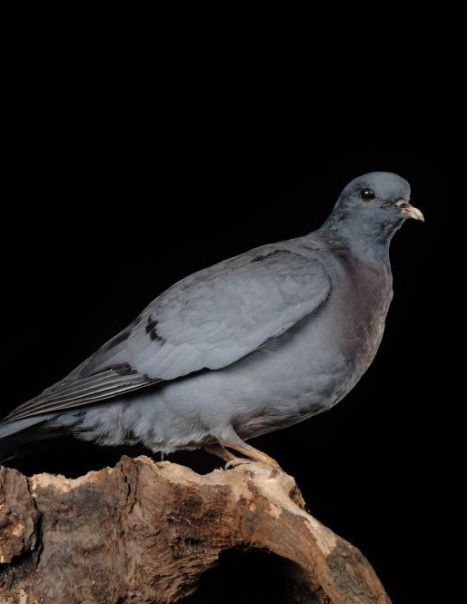 The stock dove is part of the Columbidae family.

This Little dove has blue-gray color with no white marks on the wings or neck. It measures approximately 28 to 32 cm with a wingspan of 60 to 66 cm for a weight of 250 to 300 g. The stock dove is smaller than wood pigeon and its tail is shorter. Its color is usually dark blue-gray with metallic greenish patterns on the side of the neck and a brilliant dark pinkish stain on its throat and chest. It also looks like pigeon cities whose plumage resembles its ancestor rock dove. The stock dove’s legs are red in adults and brownish in juveniles. Its beak is yellowish red base, and the iris of its eyes is brown.

They migrate from August to November to Europe, returning with other species that migrate early in March or April.

It nests in a tree hole or a nest box lined with straw, twigs and moss. They lay 2 eggs from the end of April and incubation by both parents lasts for 16 to 18 days. Juveniles fledge 28 days after hatching. It breeds some time in southern and central Finland, in the fields and meadows, forests distant feeding sites.

Finland’s population is estimated at 2 000-4 000 pairs. Their numbers are declining.