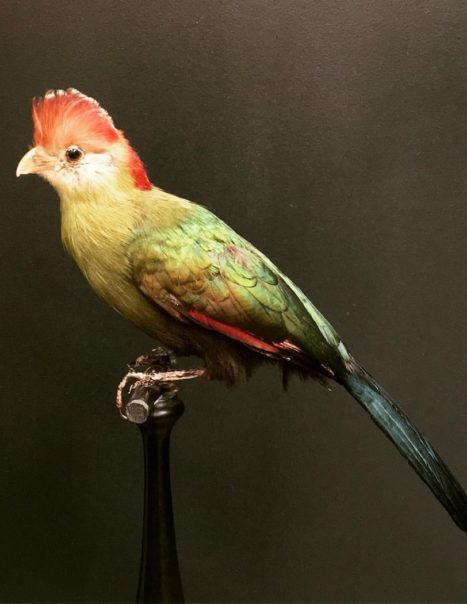 Red-crested Turaco – Tauraco erythrolophus
The red-crested Turaco can be confused with the golden touraco, they are distinguished by the few white feathers that adorn the end of the red-crimson crest. On the other hand, the red head is more developed and continues towards the neck and upper mantle. In adults, the plumage is predominantly green. The tail is black with a green sheen. Uppertail and tail are blue-green iridescent legs and feet are black. The male and female are identical. Juveniles are duller than the parents, the chicks have a black blanket.
They frequent the forests of permanent leafy trees and galleries that line the waterways. Their range extends up the Congo River in Angola.They are arboreal birds but they sometimes come down to earth to bathe or drink. They spend most of their time looking for food, they are territorial and they establish a relationship, which usually last throughout the year.There is little information from the natural environment. Most information are collected from birds in captivity.

They reach sexual maturity when they are one year old. According to reports, some are even able to reproduce from the age of 8 months. Some mature females may continue to lay eggs until the age of 18. The majority of these birds deliver their eggs between April and October, although they are able to nest every month of the year.

They build with twigs quite fragile edifice that has the appearance of a platform between 1 meter 50 and 10 meters above the ground. Laying usually includes two white eggs that are incubated alternately by 2 adults for about 24 days. The young become very active after 3 weeks, they climb into the branches near the nest before they are fit to fly. They make many attempts to take off but they are not really operational until after 4 or 5 weeks.Even after they have left the nest, they remain dependent on parents for several months. Juveniles begin to acquire green and red pigments from 25 or 30 days. The red peak is visible after 40 or 50 days. The entire plumage is definitively acquired at the age of 4 months.

Turacos are primarily frugivorous and vegetarians. They eat seeds Rubiaceae, fruits and berries, termites and large snails to acquire proteins.

This species is not globally threatened and its lifetime is estimated at 27 years.