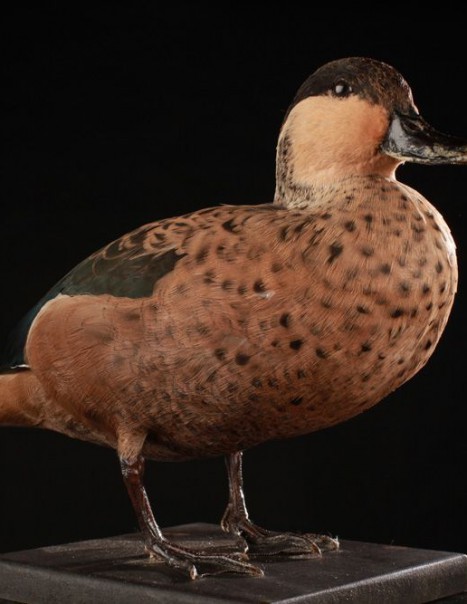 The hottentot teal is a species of dabbling duck of the genus Anas.

The essential elements that best characterize this bird is a dark Cap, pale cheeks and a dark spot on the sides of the neck. Its beak is blue-gray. In the adult male, the cap and nape are blackish brown with contrasting pale yellowish cheeks and throat. In males, the colors are more vivid than in the female. Legs and feet are dark blue-gray and the iris is brown. Chicks look like females but even more dull.

It occupies a large area and is distributed sporadically in East Africa, Madagascar, Ethiopia, Botswana, Namibia and Angola. There is an isolated population in Chad and northern Nigeria.

They live in pairs or in small groups, but after breeding, important gatherings may occur locally.

Couple formation takes place before the nesting season. The breeding season varies by region: especially in January and April in South Africa, from June to August in Malawi and in Kenya from June to October. But almost everywhere, the Hottentot teal is able to reproduce in any month of the year provided that it is plans of water and favorable conditions.

The nest is hidden in the riparian vegetation. It is a domed structure built primarily with grasses and reeds and filled with down. The female lays 6 to 8 eggs that the incubation period lasts about 25 days. Young grow fast and are able to fly after 5 weeks after hatching.