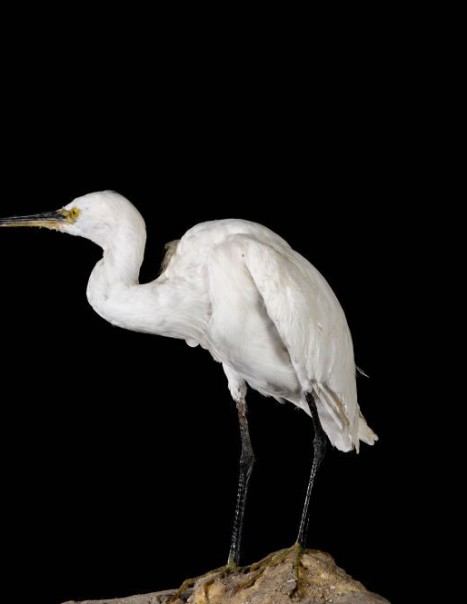 The little egret belongs to the order of Ciconiiformes.

The little egret is a small and elegant egret with a slim neck, a thin black pointed beak and black legs with yellow fingers. Adult in breeding plumage has blue-gray face and reddish lores. We can see two long, thin white feathers behind the cap, extending from the neck to the middle of the neck. The fingers are bright orange-yellow, sometimes pinkish for a short time. In winter plumage, beak is black, lores are greyish and feet are yellow or pale greenish-yellow and eyes are pale yellow.

Both sexes are similar. Young resembles adult in winter, with the beak and legs duller or greenish and greenish-gray fingers, offering less contrast.The little egret is rather silent outside the colony. It attends a variety of open wetlands with fresh, brackish or salt shallow. It is visible on the banks of rivers and lakes, in marshes, rice fields, flooded areas, sandy beaches, mudflats and mangroves. It also follows the cattle, which allows to see sometimes in drier areas. It is usually found in lowlands, but according to the geographical distribution, we can also find it between 1400 and 2000 meters.It breeds in warm and temperate parts of Europe, Asia, Africa and Australia. Most birds are resident, but northern populations migrate to Africa or South Asia. Migrations are scattered in large groups. It breeds in the Bahamas and was seen in the Caribbean and Surinam. They hunt alone or in small groups with other species of Ardeidae, but the birds are relatively far from each other, aggressively defending their feeding area.

This bird feeds mainly on aquatic creatures such as insects, crustaceans, small fish, amphibians, snails, spiders, worms, reptiles and small birds. It feeds during the day using several fishing techniques, the most traditional bird shows stirring the sand or mud with the fingers of one leg to scare the prey and then, when the prey is accessible, pierces or seized with its beak. It walks slowly in shallow water or along the shoreline, but the most common technique shows the bird standing motionless in shallow water or on the edge, waiting for prey to pass by it for the harpoon with sharp beak.

It can also follow the cattles in the fields and benefit from insects disturbed to capture them. It feeds during the day, especially early morning and late afternoon. It sleeps the night with other species of Ardeidae in mangroves, reedbeds and dead branches above the open water.

This bird often uses flapping flight and it is able to cover long distances during migration.

The breeding season begins with the arrival of the male who is the first on the scene. It picks up the nest material. It attracts female but at the same time it defends the nest site against other males. The breeding season is between March and June in the Palearctic but may vary by geographic distribution. It breeds in colonies with other species of Ardeidae. The nest is placed on the ground or in a reed bed in a tree up to 20 meters in height or in bushes, but always near water or on the water. The nest site can be located in flooded areas or wooded islands, but also in marsh vegetation. Both adults build the nest. Male brings materials to female who placed them afterwards. It is a platform made of twigs of wood or reed stems, but it is usually a loose structure.

The female lays 3 to 4 greenish blue eggs every 24 or 48 hours. Incubation begins with the laying of the first egg and lasts about 21 to 25 days, shared by both adults. At birth, the chicks are covered with white down and their beak and legs are pink, quickly becoming bluish gray. They are fed by both parents by regurgitation directly into the mouthpiece. After three weeks, the young begin to climb in nearby branches. They can fly to five weeks and they are fully feathered at the age of 40 to 45 days. They sleep in the nest every night with the colony.

Their life expectancy is estimated at 22 years.

The little egret is not currently threatened.