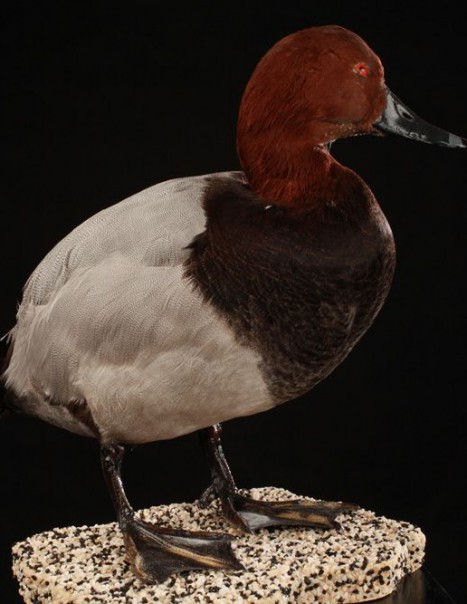 The common pochard is a medium-sized diving duck.

At any age, it has a massive silhouette, a large beak and a rounded skull. The male pochard has the head, chest and back of body black particularly contrasting with the gray top, white belly and flanks. The female is dull brown with a large white ring at the base of the beak. Some discrete white spots are present near the spout. Young are characterized by an absence of white on the head. Females are silent unlike males that emit skop-skop screaming.

Like many migrating ducks nesting area is located in the boreal zone, it has two distinct habitats but both related to the aquatic environment. In the summer, it attends the ponds and lakes of the tundra and neighbor taiga. In winter, it lives in the sea coast, estuaries and sheltered bays which are feeding sites.

This duck is a high performance diver, even in big sea. It can dive up to 6 meters deep and stay submerged for nearly a minute, it migrates later, sometimes just before the freeze, they fly in tight bands, most join the coasts of Western Europe. In France, large colonies are present in Normandy and Brittany. But they are also moving to the Black Sea, the Caspian Sea and the Mediterranean.

The nest is a simple dip or a small depression in vegetation cover, lined with grass and down of the female. The female lays 8 to 11 eggs that it provides only brooding. Incubation lasts 26 to 28 days.

Its diet is strongly linked to its habitat locations. In summer,  in the tundra, its regime is more based on consumption of plants and insects. In winter, the priority is given to shellfish and marine worms. This duck is deemed omnivore, the largest winter concentrations are found above the large deposits of shellfish, mussels. The highest bands can be several thousands.